At long last, we're off!

Welcome to the second installment of my series of essays in which I charge brazenly onward toward my goal of creating a new theme park. The first blog entry can be found here. This time around, we're going to be discussing the park's entry land - SOCIETY GROUNDS.

In my last post, I delved into the various type of park entrances, what makes them work, and how they benefit the park as a whole. Here, I will be applying that analysis and the lessons learned to try and make a first land that not only stands well on its own, but also surmises the themes and motifs guests should know going into the park. So let's get started!

Society Grounds serves as the headquarters and transportation hub for members of the Global exPloration Society, or G.P.S. This multiracial, multicultural campus is positively buzzing with activity, as explorers present their latest findings to a rapt audience, newsies shout out the latest  discoveries that have come in hot off the presses, and the music of an age gone by drifts down from open windows. While the architecture takes inspiration largely from Europe, it's hard to place exactly where these grounds might actually be located. Guests are welcomed into the land as the latest Society recruits, out to make a name for themselves as famous explorers and treasure hunters - this is a role guests will play to varying degrees for the entirety of their park experience. Guests will shape their own story as they go forth, but there are certain storylines set in place for them to follow, several of which begin in Society Grounds:


It wouldn't be any fun if I just told you what the Society Grounds is like without showing you, so let's explore the setting together! A disclaimer: all art below is mine unless stated otherwise, and though I have tried to visualize my ideas as best I can, I am not a professional artist. Just a heads up! Regardless, I hope that the ideas behind the art come through clearly, but if not I'll be happy to answer any questions you may have!

This diagram shows the general layout of the land from a bird's eye view. Please note that everything is roughly to scale. By looking at the points of interest, you can gain a sense of the land's flow, but I'll go a bit more into their individual stories below.

With the general overview of the area out of the way, let's move into the visualization of these areas. Upon entering the park, you'll find yourself in the gardens of the Society Grounds, which take the shape of a dense rainforest. Columns from all sorts of past civilization can be seen buried deep in this jungle. The jungle paths lead up to a singular building - the Museum of Mystery, through which guests enter to the rest of the Grounds. The park entrance will look something like this:

A few more details to point out here - between the two entrances lies a fountain, taking the form of a waterfall split by an arm thrusting a torch forward. The arm and torch are stone, but the flame is real. Above this, the G.P.S. motto in Latin appears. It reads: Semper et deinceps, Stulta tamen intrepidus, or in English - "Always forward, foolish yet fearless." (My Latin is courtesy of an online translator, so if anyone knows a more accurate translation, please let me know!) The fountain tries to embody that sentiment. This first area is meant to be a transitory space in which the guests willingly enter, subconsciously putting them in the mindset of an explorer before they have entered the park proper. The varying origins of the presented columns and flora also try to make this space a coming together of cultures, reflecting guests' various places of origins and hopefully preparing them for the experience ahead. Finally, the design of the Museum of Mystery building is largely taken from Oxford's Museum of Natural History: 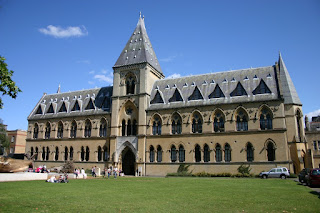 I tried to keep the Museum of Mystery similar enough to maintain the museum motif, but I also wanted to try to add a temple-like quality of reverence to it, as the entrance plaza is intended to be a place of peace and reflection.

Moving through the building, we come to the main thoroughfare of the Society Grounds:

Here we see the facades of the buildings listed in the land layout diagram, and the general thrust of the walking areas. The facades are given a warm, generally reddish hue to signify how warm and inviting this land is, though the splashes of deep red hint at the danger that lurks outside the Grounds. In general, the grounds should feel familiar, both in terms of guests' own lives (much like how Main Street evokes a sense of home), but also meta-textually. The land plays off guest expectations for a theme park, and is overall fairly traditional. There's a dark ride, a train, a gift shop, and a weenie. All the essentials are there to make the guest feel at ease. Other lands will play this meta-relationship a bit differently, if everything goes according to plan.

Items of interest in this concept include the corner of the Royal Hall of Geography, the canvas banners marking the bazaar, and the cardinal-direction clock faces on Adventure Tower, as well as the crow's nest lookout point. Other notable items - the entrance to the Around the World in 80 Days ride is a building with a sign reading "Fogg's Landing", and the design of the building is taken from a early 20th century rail station, mirroring the actual train station on the far side. The balloon's color scheme is taken from the covers of several reprinted editions of the novel, as well as the 1956 film.

The sailing flags were noted for their humorous warning above, but they also serve a dual purpose, as do many of the elements depicted here. The crow's nest, the balloon, the flags, the luggage, and more are intended to give guest's a feeling of a land on the move. The Society Grounds are constantly in motion, with people moving in and out and heading to new lands frequently. Though this land is a base for much of what guests can do, this design is intended to keep them from staying too long and remind them that there is so much else to see within the park. It's a base of operations for guests, but not necessarily the main focus of their visit. Indeed, in this concept we can see city buildings and mountains in the distance, hinting that there are plenty more places to explore.

And, of course, there's the airship.

In my design, Expedition Isles has a closed curtain-style entrance and a hub-and-spoke style park layout. At it's center lies Expedition Plaza, and anchored smack dab in the middle is our park icon - the Spirit of Adventure!

While Expedition Plaza isn't technically part of the Society Grounds, as the hub is it's own area, the Spirit of Adventure has a presence over the Grounds that can't be ignored. Unlike Cinderella Castle's juxtaposition with Main Street in Magic Kingdom, the Spirit of Adventure is a fulfillment of what Society Grounds has to offer, and should not look out of place sitting at the end of the land. Instead, it continues the transportation motif established in the Grounds, and serves as a gateway both literally and metaphorically into the unknown - or at least the other lands of the park.

General plans for the Spirit of Adventure include a restaurant in the rafters, complete with splendid views and vintage news reels and serials projected on the interior walls, and a walk through Explorer Hall of Fame in the passenger area. This Hall of Fame would pay tribute to real explorers throughout history with a focus on the courageous men and women of the late 19th and early 20th century. While Expedition Plaza in this rendering is designed to look like a large compass, I have relegated that role to Adventure Tower and the plaza will instead have a large world map motif. Occasionally, when someone walks on certain points, a red line will follow them to their next destination on the motif, a la the classic transitions of Raiders of the Lost Ark.


And that's a wrap for just about everything Society Grounds has to offer! It's an entrance land that sets up our guests as explorers, invites them to participate in the fun, and gets them ready to get going to see what the rest of the park has to offer. It does all of this while providing some history to the land and park as a whole. Or, at least, I hope it does!

So what do you think? Does the land stand on it's own well enough? Is there anything you would add or remove? Let me know in the comments!

Oh, and thanks for reading!

Movies and theme park attractions are kind of an odd pairing when you think about it. True, movies have action, which can translate to p...